VAIL, Colo. – The snowboarding season is in full swing at this point in the winter with local athletes all vying to move on to the next level of competition. When asked about the endgame for many of these snowboarders, the director of freeski and snowboard at Ski & Snowboard Club Vail (SSCV), Chris Laske, explained the hierarchy of competition as a logical progression of steps, “First is USASA…then if you start topping the podium consistently, you can go on to the Futures Tour. If you podium at Futures, you get a Rev Tour spot. If you win the NorAm cup – which is Rev Tour – you get that World Cup spot.”

And while that may sound simple, it takes years of consistent training to get to the World Cup. Only the most dedicated athletes get there, and SSCV has boys and girls all competing at the various levels with hopes of making it to that ultimate, final tier.

Ski & Snowboard Club Vail hosted its first halfpipe competition in over four years this January 26th at the US Open Junior Jam and World Rookie Tour Halfpipe Qualifier. With almost 100 competitors across 24 divisions, it was a massive event featuring the talents of snowboarders and freeskiers of all ages. At the end of a full day of intense competition, Ski & Snowboard Club Vail snowboarders grabbed 11 of the coveted spots atop the podium, and freeskiers scored another 10 for SSCV.

SSCV’s Head Coach of Snowboard Park & Pipe, Ronnie Barr, was thrilled that the club, Chris Laske, and Vail Resorts were able to make the double qualifier happen on home turf, “This event means the world to us. It’s amazing to finally have a competition back at Vail, and to host a World Rookie Tour and US Open qualifier really steps up the level of amateur competition in the valley.” 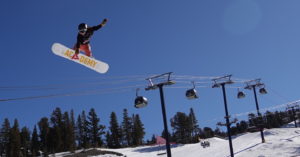 Viviana Oram catches big air off of a slope jump at Mammoth Mountain as part of the U.S. Revolution Tour on February 7.

Continuing the success the club saw at the halfpipe event earlier in the season, several young athletes between the ages of 13 and 19 made waves at U.S. Ski & Snowboard’s Revolution Tour in halfpipe, slopestyle, snowboard cross, and big air events. The first away Rev competition – hosted at Mammoth Mountain between February 4th and 9th – provided Ski & Snowboard Club Vail athletes the proper platform to demonstrate the skills they have cultivated over the course of the season. Viviana Oram, a 13-year-old student from Vail Ski & Snowboard Academy, made her first appearance at the Revolution Tour alongside fellow 8th grader and teammate, Brooklyn Depriest. As some of the youngest snowboarders at this stage of competition, the two are getting an early start to a promising career. But they are in good company alongside their fellow SSCV Rev Tour teammates – Brian Rice, Jack Coyne, and Connor Schlegel – who have set a great example for the young upstarts, with Schlegel finishing 3rd in snowboard cross at a recent Nor-Am event at Gore Mountain and Rice just missing finals at the Canadian Nor-Am.

Ski & Snowboard Club Vail has also seen standout performances on the global stage over the last few months. Jack Coyne, a senior at Vail Ski & Snowboard Academy, has had quite the season. Coming off of a 2nd place finish at the Revolution Tour hosted on Copper Mountain, Coyne then competed in the Youth Olympics on behalf of the United States in the halfpipe and slopestyle events this January. He ended several intense days of competition in Switzerland with a 5th place finish in halfpipe and 7th place for slopestyle. SSCV teammate, David Retzlaff, a 20-year-old that hopes to make the 2022 Olympics for slopestyle, has also been making serious gains at the international level. Starting 2020 off with a 4th place finish in slopestyle and a gold medal in big air at the Canadian Nor-Am, Dave went on to grab a spot in the top 20 at the Italian World Cup. In the U.S. World Cup that took place two weeks later at Mammoth Mountain, Dave beat out 27 other athletes to finish 16th in slopestyle. Dave will compete in two more competitions before the season is up, and his coaches are optimistic that he will continue to progress.