A productive and unprecedented summer at Ski & Snowboard Club Vail

While the last few months have made the memory of snow feel like a distant dream, Ski & Snowboard Club Vail (SSCV) athletes, coaches, and staff remain focused on the winter ahead. After an abrupt end to the ski season in March amid growing concerns over COVID-19, coaches had to generate new ways to keep athletes positive, involved, and progressing in accordance with CDC recommendations and state and local requirements. Over the late spring and summer, SSCV staff has been able to achieve this objective by getting kids outdoors, at the Minturn Fitness Center, and in the trampoline room working alongside teammates from a safe, albeit social, distance. The results of their efforts have been effective and reflect the dedication Ski & Snowboard Club Vail has to the sport and the kids.

Since the start of the cycling season, mountain bikers from all over the nation have been flocking to competitions in the region. From Vail Recreation District’s Mountain Bike Town Series to Aspen’s Snowmass 50 mountain bike race, local races have been popular and abundant with talent. But Ski & Snowboard Club Vail cyclists have not been deterred by the stiff competition. Under the guidance of Nordic and Cycling Program Director, Dan Weiland, SSCV athletes have consistently placed in the top 5 in almost every age group and experience level. With months of vigorous training on the trails under the watchful eyes of an experienced staff of coaches, it is no surprise that these cyclists continue to do well at all levels of competition. “The turnout for our cycling and Nordic team programming this summer has been terrific.  Masks and social distancing have definitely become ingrained in our culture”, Weiland shared.

But it is not just SSCV cyclists making gains this summer. In Nordic, coaches have taken the warm weather in stride and their practices have involved outdoor activities such as roller skiing, hiking, and trail running alongside conditioning at the Minturn Fitness Center.  “These kids remain committed to having their hard work in the summer turn into results in the winter.  I think this is the fittest I have ever seen the team.  They can’t stop and socialize.  It is all business-but fun business, being out with other kids”, said Weiland.

Over the last few months, mogul skiers have been perfecting their bumps and jumps technique on water and snow, with water ramp camps taking place in Steamboat and in Park City’s Olympic Park earlier this summer and an on-snow camp that just recently wrapped up at Mt. Hood.  Coupled with strength and conditioning and trampoline blocks, Mogul Program Director John Dowling shared,  “My coaches and I have been thrilled to be with our athletes this summer, albeit masked and socially distanced, watching them make huge strides in preparation for the winter.  More important than ever, it has kept them focused, inspired and engaged in the most difficult of COVID times.” 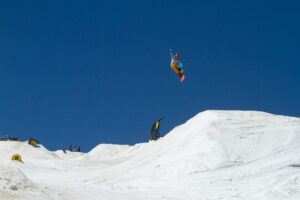 Snowboarders have had access to various camps at Copper Mountain in addition to dryland at the Minturn Fitness Center and trampoline and skateboarding sessions at Vail Ski & Snowboard Academy, where a mini ramp was recently installed on the stage to accommodate SSCV athletes. At Copper, operations staff built several “Bigger ” features for Ski & Snowboard Club Vail’s exclusive use at the private camp hosted by SSCV snowboard and freeski coaches which wrapped up this past week. Snowboard and Freeski park & pipe, along with big mountain athletes took advantage of Woodward Copper’s action sport facility to hone in on their respective skillsets early on in the season and put those skills to the test at SSCV’s private camp at Copper as well.   SSCV Snowboard and Freeski Program Director Chris Laske shared his excitement, “ The ramp, tramp and strength and conditioning work done earlier this summer laid the foundation for our athletes to try new things on-snow at Copper where these athletes made huge gains.  When I compare my interactions with these kids from afar when COVID shut everything down back in March to today I realize now more than ever the life-changing impact our sport and our coaching staff have on all aspects of these kids’ lives.”

Alpine athletes ages 10 and older had a number of opportunities to stay engaged and fit through Zoom workout sessions after mountain operations shut down in March.  This regiment has continued for alpine full-time athletes ages 14 and older in person at the Minturn Fitness Center all summer long.

SSCV’s 12 and 13-year-old Alpine athletes started the post-season off with a camp at Beartooth Basin in June and they recently finished off a 10-day-long camp at Mt. Hood.  U14 Head Coach Rob Worrell shared, “Many great physical and mental gains were made, not just on snow, but in reconnecting kids in a safe outdoor environment with each other and their coaches”.

Similarly, Alpine U16 and FIS athletes attended camps at Copper in early June and recently finished a training camp at Mt. Hood. When off-snow, they have been supplementing their technical training with strength and conditioning circuits at the Minturn Fitness Center.

SSCV Executive Director Kirk Dwyer stated, “Due to the challenges from the COVID pandemic this has been the most challenging yet rewarding five months of my career in snowsports.   Seeing so many SSCV athletes able to do what they love in a safe and managed environment personifies the profound impact of being involved in a competitive snowsport.  As an organization we look forward to carrying this into the 2020-2021 season for all of our athletes and staff.”