VAIL, Colo. –  The U16 Rocky/Central Junior Championships at Winter Park proved to be a huge success for Ski & Snowboard Club Vail (SSCV) men and women this week. Featuring the best alpine skiers throughout the U.S. Ski & Snowboard Rocky Mountain and Central Divisions, the competition was high stakes for the 180+ athletes that attended.

“This is a big event for us,” said SSCV head women’s U16 performance coach, Scott Houser. “It’s the pipeline to compete at the national level for the U16s. Only the best from each region will have the opportunity to compete at U16 Nationals.”

The championship began with the men and women’s downhill event. Though the skiers are allowed two training runs, the official competition is a single run where athletes take very few turns and hit the highest speeds out of any other alpine event.  And while SSCV’s training philosophy focuses more on the technical events of slalom and giant slalom with occasional super-G training interspersed, some SSCV athletes chose to compete in the downhill event. Starting the week off with the first of several podium finishes, Zoie Palmer flew down the course to secure a 2nd place among 58 competitors with Noelle Edelman finishing among the top 15.

In the super-G event that took place the next day, SSCV athletes shined with their speed and strategic lines. On the men’s side, 91 competitors battled it out with SSCV taking home 7 of the top 20 finishes. Nick Kirwood continued the recent success he had at the international Alpe Cimbra competition to end the day with a bronze medal for the event. Trailing three-hundredths of a second behind him and guarding the podium was teammate Sebastian Kohlhofer. Just behind Kohlhofer was Hunter Salani in 7th, and William Wasserman in 10th. Sweeping the top 4 spots out of 85 on the women’s side were Liv Moritz in 1st, Kjersti Moritz in 2nd, Kaitlin Keane in 3rd and Zoie Palmer in 4th. Coming in 1.04 seconds off of Palmer was Avery Schaffler in 9th. In total, the SSCV women obtained 11 of the top 20 finishes.

The combined event took into account the athletes’ pre-established times from the super-G race in conjunction with their times from a single slalom run. With SSCV having already dominated the field earlier in the day, the athletes capitalized on their lead and continued climbing up the ranks. The U16 SSCV men skied sharp and fast in their slalom run, with Kirwood jumping up to 1st place, Kohlhofer to 2nd, Salani to 3rd, and Wasserman ending the event in 5th. On the women’s side, Liv Moritz managed to hold on to the gold medal she received in the super-G. Zoie Palmer ended the slalom portion in 4th place, securing her another podium spot in 3rd with teammate Kaitlin Keane just .07 seconds off Palmer’s time securing a 4th place finish in the event overall.

The same names and faces continued to distance themselves from the rest of the field in the giant slalom race the next day. Kirwood, Kohlhofer, and Salani continued to fight amongst themselves for the top spot on the podium over the course of two runs. This time it was Kohlhofer who took the gold medal, followed by Kirwood with silver, then Salani with bronze. Wasserman remained competitive in 6th, and teammate Hunter Roach breached the top 10 with an 8th place finish.

SSCV women had another especially strong day with Kjersti Moritz taking 2nd and sister Liv in 3rd, Keane in 4th and Palmer in 5th. Teammates Phoebe Heaydon and Molly Roberts closed out the top ten in 9th and 10th out of 64 athletes who finished the race.

The championship series ended on Sunday with the slalom event. The athletes had two runs to make it down the course as quickly as possible in the ultimate test of agility, control, and speed. In the men’s slalom, Sebastian Kohlhofer came out on top once more.

16-year-old Kohlhofer ended the championship with 3 podium finishes, and edged out the competition as the overall male U16 Rocky Central champion. Teammate Nick Kirwood just missed the podium for the slalom event by two-hundredths of a second, and came in 2nd overall with his steady skiing. Wasserman rounded out the top 10 in slalom with his 10th place finish.  Hunter Salani ended the week with an overall 7th place finish, followed by William Wasserman in 8th.

The women’s slalom settled things up for what had proven to be an extremely competitive group of consistent top finishers. Steamboat’s Tatum Grosdidier claimed 1st place, followed by SSCV’s Kjersti and Liv Moritz in 2nd and 3rd, then Palmer and Keane in 4th and 5th. Teammates Sydney Birtwhistle and Sophie Stocker came in 8th and 9th for the event, and as a whole, SSCV women claimed 10 of the top 20 spots in a field of 88 competitors. 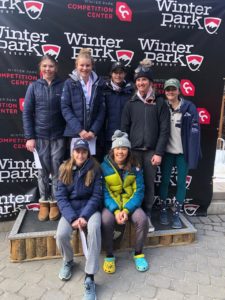 When all was said and done, Liv Moritz ended the championship series as the 2nd place overall U16 female finisher. Zoie Palmer went home with a bronze medal and bragging rights as a top 5 finisher in all 5 events. Kjersti Moritz grabbed 4th, Kaitlin Keane scored 5th, and Sydney Birtwhistle closed out the top ten.

“It was a fun week of racing,” said Ian Lochhead, Ski & Snowboard Club Vail men’s head alpine U16 coach. “Winter Park did a great job hosting the event.  I’m really happy about how a lot of the kids are skiing. It’s fun to get a few good results along the way, but we understand there is a long way to go, so we try to stay focused on continually improving, and trying to have fun skiing.”

The competition continues at home with the Sync Championships taking place from March 19-22.

For the men, SSCV’s Sebastian Kohlhofer, Nick Kirwood, Hunter Salani, Hunter Roach and Will Wasserman qualified for U16 Nationals to be held in Sugarloaf, Maine starting April 1 featuring top U16 qualifying racers from across the country.  SSCV’s Kjersti Moritz, Liv Moritz, Kaitlin Keane, Sydney Birtwhistle, Avery Schaffler, Frankie Marston, Phoebe Heaydon, and Zoie Palmer also qualified for U16 Nationals taking eight of the nineteen U16 Nationals spots for the women from the Rocky Central Division.