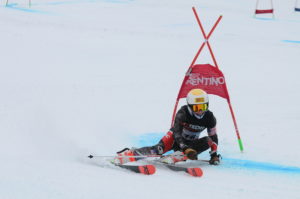 VAIL, Colo. – Ski & Snowboard Club Vail alpine athletes have been experiencing tremendous success at the local and international levels over the last couple of weeks. As part of a European tour, qualifying athletes between the ages of 14 and 15 rose to the occasion and took advantage of what SSCV men’s U16 alpine coach, Ian Lochhead, described as, “A great opportunity and learning experience.”

The series of competitions began with the Alpe Cimbra FIS Cup, formerly known as Topolino, that took place between January 29 and February 1 in Folgaria, Italy. Two Ski & Snowboard Club Vail alpine racers, Nick Kirwood who qualified to represent the United States and Phoebe Heaydon who qualified to represent Australia went head-to-head against skilled athletes from all over the world in the giant slalom and slalom events. Kirwood pulled out all the stops, securing tenth place in slalom and sitting two-tenths of a second away from a podium position after his first round of giant slalom (GS)  And while his second run of GS ended with Kirwood falling in the ranks after a substantial mistake, Head Men’s Alpine U16 coach, Ian Lochhead, noted that this was a pivotal competition for the two young skiers, “This is the first chance for kids at this age to ski on an international stage representing not just Ski & Snowboard Club Vail, but also their country. As a 14 or 15-year-old, it’s a pretty great opportunity.”

Several days after the last skier left the hill at Alpe Cimbra, another competition in Baqueira-Beret, Spain began. The OPA Cup, formerly called the 7 Nations Cup, is considered a high-level international race with only the best of the best under 16 alpine skiers coming out and taking part in the giant slalom and super-G events. SSCV’s Liv Moritz and Sebastian Kohlhofer, qualified for the elite competition, with Moritz able to attend the three-day event. Facing over 50 athletes from 10 different nations, Liv Moritz scored a 15th place finish in both the GS and super-G races. After making the quarter-finals in the team GS alongside her fellow U.S. athletes on February 13, Liv went on to support her sister, Kjersti Moritz, at the Pokal Loka.

The Pokal Loka is one of the oldest children’s FIS competitions in the world, and this year marked the race’s 45th anniversary since its conception. Upon arrival in northern Slovenia, SSCV athletes Kjersti Moritz and Tianna Bruce took to the course looking to set themselves apart from the steep competition. After two runs, the U16 teammates ended the giant slalom event in good standings; Bruce grabbed 5th place at her first European competition and Kjersti ended the afternoon in 7th. For the GS team event that occurred the next day, 19 countries were tasked with choosing their best skiers to represent them. Kjersti Moritz was the only woman selected, and she certainly did the United States justice with the speed and agility she demonstrated as she came down the course. Missing finals by 2/100ths of a second, Moritz closed out the vigorous competition in 5th place. SSCV’s William Wasserman also qualified to represent the United States at the Pokal Loka, but was ultimately unable to attend.

Another notable achievement came from SSCV’s Sophie Stocker, who qualified and competed in the slalom event on behalf of Great Britain at the Trofeu Borrufa competition in Andorra. Facing 19 other countries and 48 competitors, Sophie exhibited incredible endurance after coming back from an injury she incurred earlier in the season.

“The girls skied very well at the international level,” SSCV’s head U16 women’s performance coach Scott Houser stated. “They got better every run and adapted to the experience. That’s all you can hope for as a coach.”