With World Cup starts for the top-two finishers on the line, the North American moguls season got underway this week with three days of competition at U.S. Selections in Winter Park, Colo. Ski & Snowboard Club Vail (SSCV) athletes past and present made big statements in the first major event of the North American winter.

On Monday, former SSCV Freestyle athlete Emerson Smith, who has graduated to the U.S. Ski Team, skied to a podium result, third, behind fellow national team members Bryon Wilson and Joel Hedrick. They were followed closely by brothers Casey and Jesse Andringa, who finished fifth and sixth. For the women, Heidi Kloser, who has rejoined SSCV in an effort to reclaim World Cup starts, finished seventh. Kaitlyn Harrell was 12th. Gabriella Fisher wasn’t far off in 16th and secured a NorAm berth.

But on Wednesday, Smith was able to convert, earning a second-place result and starts in the upcoming World Cup events at Lake Placid and Deer Valley. Jesse Andringa was the next best SSCV finisher in seventh. In the women’s event, Heidi Kloser took a step back and finished 10th, while Kaitlyn Harrell was again 12th. She was followed by SSCV’s Hannah Miles in 13th and Katie Coyne in 16th, both of whom secured NorAm bids. 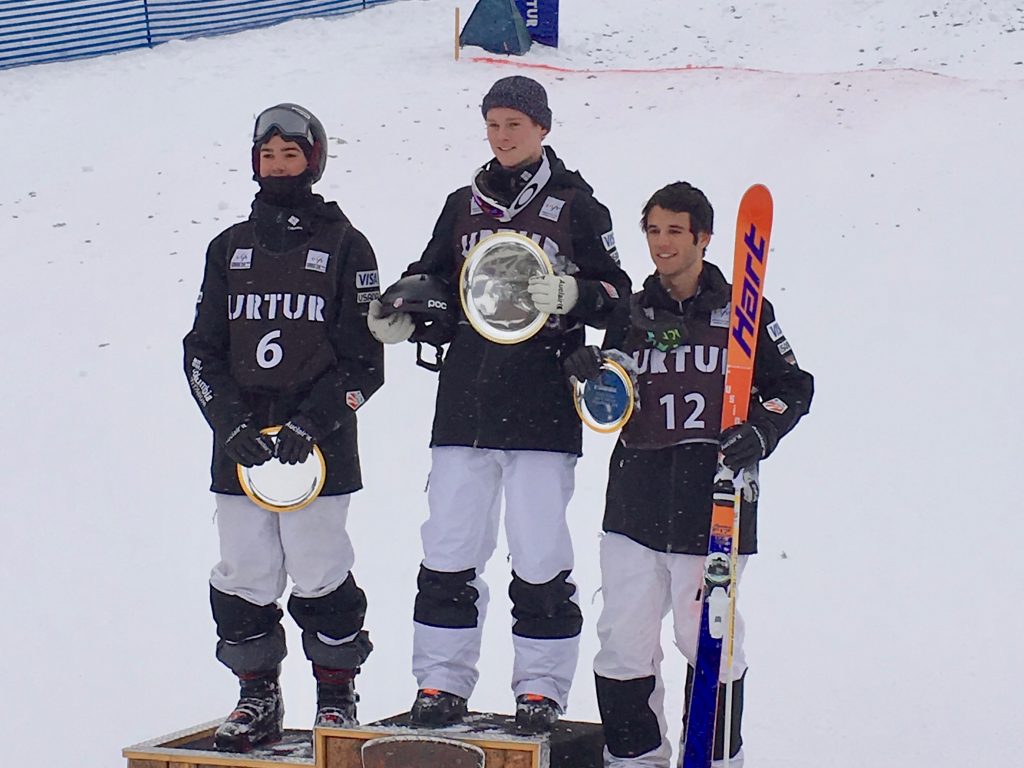 “Most of the team did a really good job of securing berths for NorAms,” said Dowling. “Heidi (Kloser) had a little bit of a tough go with a new scoring system on the bottom air for a cork that she was throwing. We got blindsided by a new judging system, which is unfortunate because she was skiing well, but a rule change got the best of us.

“Emerson (Smith) was named to the national team last season and he actually got a (World Cup) start in Ruka. I think that was an eye-opener for him,” added Dowling of the second-place finisher. “He’s been really refining his competition strategy, figuring out how to move through qualifying, finals and into super finals.”

Competition concluded on Thursday with dual moguls. SSCV’s Hunter Bailey, now a member of the U.S. national team, was able to bounce back after finishing 13th and 65th earlier in the week to win the event. He shared the podium with SSCV’s Casey Andringa. 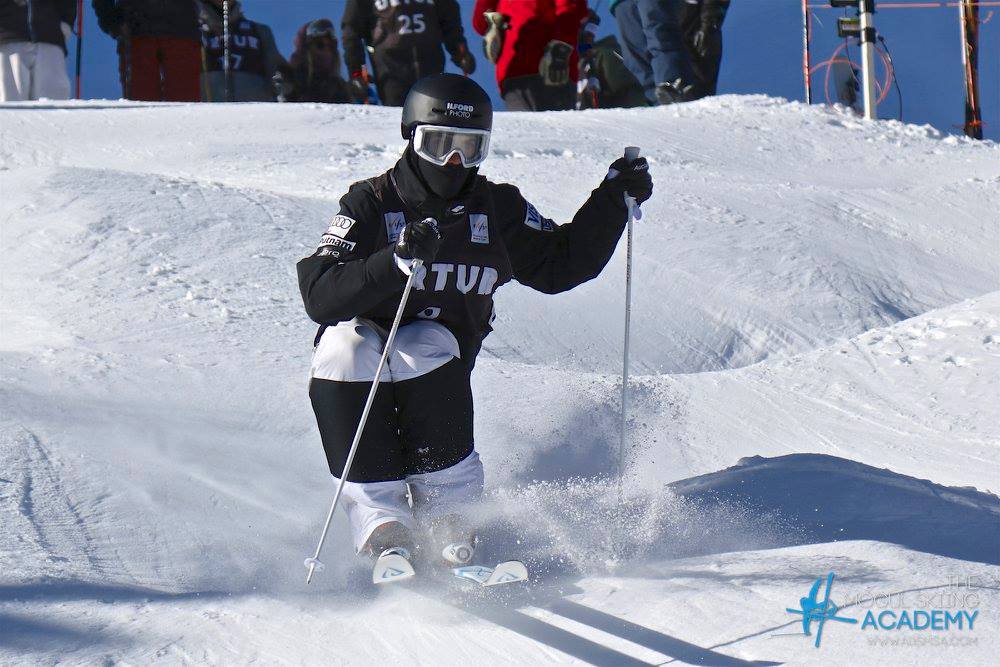 Hunter Bailey gets the win in the duals at US National Selections in Winter Park on Thursday. Photo courtesy of the Mogul Skiing Academy/Facebook.

“Awesome job by Hunter (Bailey), who had a tough run in his first event, which was disappointing for him. He wanted to be in contention for the World Cup starts,” said Dowling. “When Casey (Andringa) and he met in the semi-finals, that was the dual of the day. Hunter gave it everything. He went huge off the top air. It was one of the more spectacular runs of the week. This win should give him a lot of confidence heading into the rest of the season.”

Another stand-out performance was SSCV’s Matt Leseur, skiing for Bermuda, who made the finals each day improving as he went along: 13th, 10th, and 8th. Similarly, Trevor Wahl finished 12th, 18th and 15th, securing a spot on the NorAm circuit. And 14-year-old John Leseur skied to an impressive 24th-place result in the duals.

“The way our skiers were looking on the hill, especially a lot of those young guys who were getting their first shot at this event, they really represented themselves well. And then for the top guys, I think Casey Andringa put down the best men’s skiing we saw all week, really dominant in the technical aspects. So our guys looked great and it was really positive at all levels.” 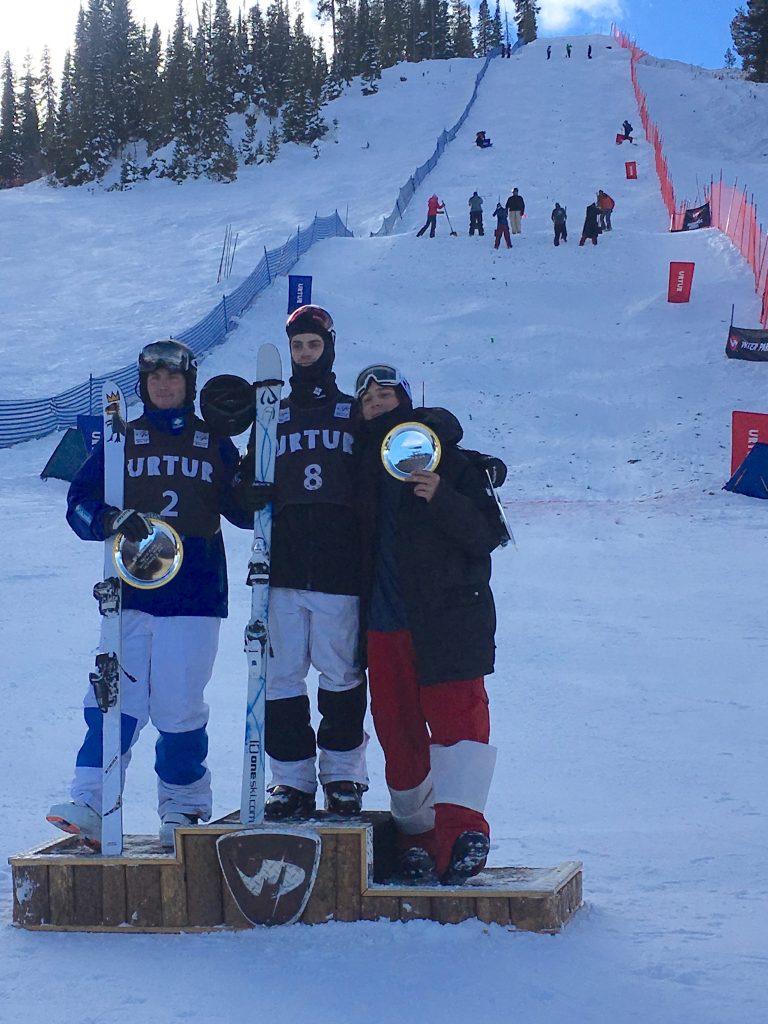 Hunter Bailey, Jeremy Cota, and Casey Andringa on the podium in the duals Thursday. SSCV Photo.