Ski & Snowboard Club Vail skiers dominated the podium throughout the weekend at the Rocky/Central U14 Alpine Championships at Howelsen Hill in Steamboat Springs.

On the boys’ side, Nick Kirwood snagged a GS win, while Seb Kohlhofer picked up victories in slalom and GS. Other podiums performances included Toby Scarpella and Hunter Roach, in addition to several more by the aforementioned winners.

“It really was a great week of racing and our athletes stepped up to the challenging conditions,” said U14 Head Coach Kristina Revello. “On the girls’ side, our 2004s are very strong and skied well all week while our 2005 group really pushed themselves and squeezed into the top 20 in each event. The boys held onto the podium everyday, both 2004 and 2005 boys were peppered throughout the top 30 each run.”

After tying in Friday’s GS, SSCV’s Liv and Kjersti Moritz, identical twin sisters, were separated by a mere five points (485-480) in the overall standings. They finished first and second, respectively, followed by Tianna Bruce with 410 points. SSCV girls swept the top six overall.

Of these U14 athletes, SSCV qualified three girls and one boy to U16 Alpine National Championships: Liv and Kjersti Moritz, Palmer and Kohlhofer. Can-Am qualifiers include Bruce, Kaitlin Keane, Scarpella, and Kirwood.

“Steamboat always puts on great events, they work very hard to ensure every athlete has a positive experience and this week was no different. We were able to ski on a similar surface to that of the NCAA National Championship, which were held the week before our event,” said Revello. “Our staff is very proud of the effort each of our athletes displayed this week. We look forward to our final races and getting started on next season with tremendous momentum.” 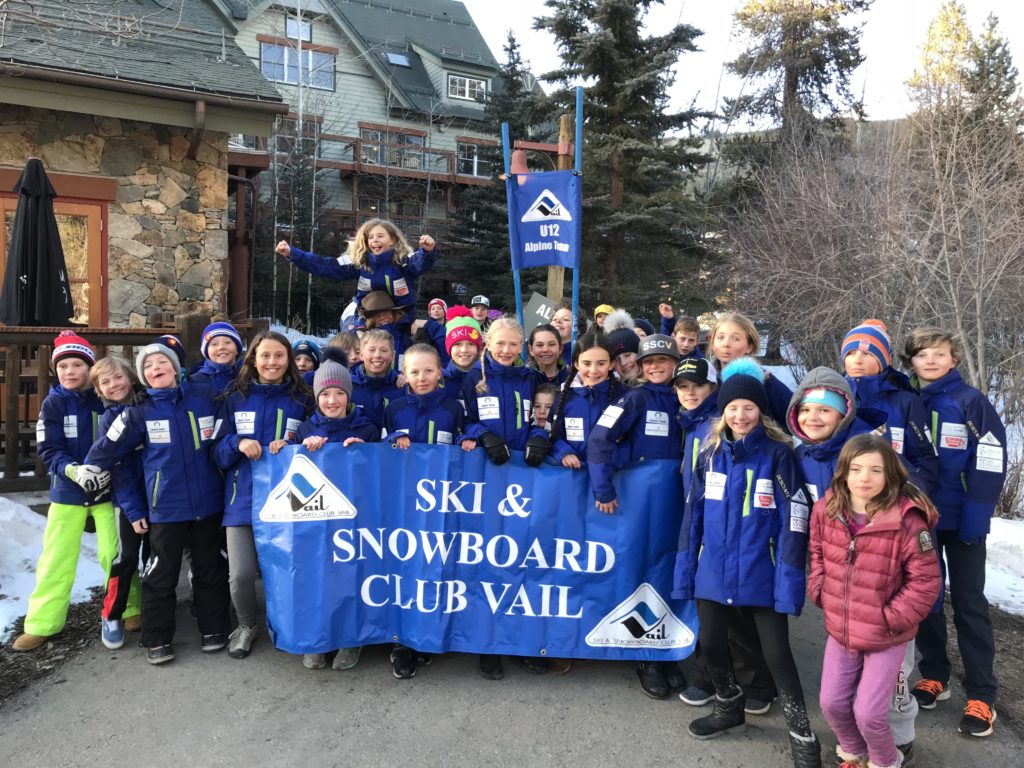 SSCV’s U12 alpine skiers made their way to Keystone for the regional championships over the weekend. The races were originally scheduled for Powderhorn but were moved due to lack of snow.

“I thought the event was run very well,” said Youth Alpine Director Alissa Consenstein. “I thought the course sets were really appropriate and challenged the racer’s ability. At this age, most of their races are split, so it was the first time many of these kids had competed against one and other, so it was really good to see how they stacked up.”

SSCV’s Andrew Gunther was the star performer of the weekend winning three of the four races (two GS, one slalom). Meanwhile, U10 racer Jackson Leever skied up to the U12 age group and scored impressive results: second- and third-place finishes in GS and slalom, respectively. Ricky Shay and Tyler Hopkins also earned podium results.

On the girls’ side, Logan Hale snagged a trio of podiums, including two second-place finishes across both disciplines. She was joined by Ashley Anderson, who registered a win in slalom, and Isa Gonzalez, who took second in the same race.

“It was great conditions, very fair. Keystone did a great job hosting the event,” said U12 Head Coach Brett Borgard. “The kids really shined in the slalom on the second day of racing. They really showed up and attacked that day. It really showed how hard these kids have worked.”

Throughout the weekend, SSCV landed between three and five athletes in the top 10. The club occupied half of the top 10 in four of eight races.